ST. CLOUD —Northstar Link 887 will connect with special 888 Northstar train service on Saturdays, Nov. 30 – Dec. 21. A single ride may be purchased onboard for $1.75, the regular weekend rate. Families can save money with the Northstar Family Pass, which will be honored by Northstar Link for this special service.

Northstar Roundtrip Family Pass: Pay one low price and get round trip Northstar rides for 2 adults and up to three kids ages 6-17 (kids 5 and under ride free!). Family Passes may be purchased online at http://metrotransit.org/northstar-service-to-holidazzle.aspx. Print the pass and show it to the Northstar Link driver. Be sure to save your printout for the return trip.

Complete schedule details for the train are available at  www.metrotransit.org/northstar.

The Northstar Link route 887 will have no service on Thanksgiving Day, November 28, but will run a modified schedule on the Friday after Thanksgiving, November 29 (see below). Route 887F (Fabulous Friday) will run as regularly scheduled.  Weekend fares will apply for 887 service while normal fares apply for 887F service.  Complete schedule details are available at www.CatchTheLink.com for the bus and www.metrotransit.org/northstar for the train. 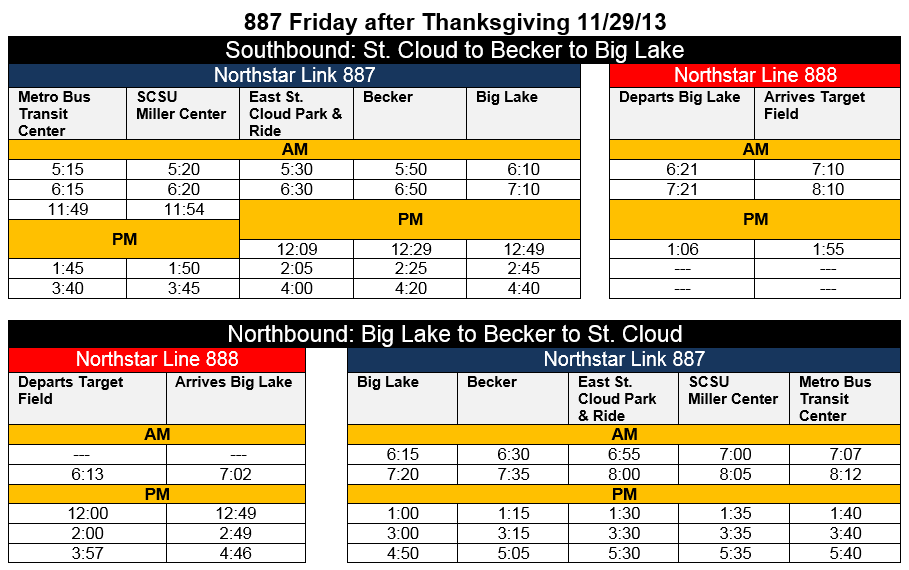 ST. CLOUD — People are hopping on board the Northstar Link Commuter Bus in record numbers to travel in the highway 10 corridor between St. Cloud and Minneapolis. Link ridership in September reached a new high, with more than 5,400 rides, an 18 percent increase over September 2012.

The Northstar Link Commuter Bus, which has stops between St. Cloud and Big Lake, coordinates with most Northstar Commuter Rail train arrivals and departures at the Big Lake Station seven days each week.  The train schedule primarily serves commuters during rush hours, and offers limited weekend service plus some special events, including Twins baseball and Vikings football games.

The number of commuters on the train also is growing.  September 2013 ridership was up about seven percent over September 2012.

The top three reasons people use Northstar Link are cost savings, stress-free travel, and convenience, according to Stearns County Commissioner Leigh Lenzmeier, chair of the Northstar Corridor Development Authority, which is the group that oversees the Link.

“I give some of the credit for the increased ridership to the efforts of the St. Cloud State Mass Communications students last year,” Commissioner Lenzmeier said. “As a class project, they helped build awareness on campus for the Link and train services. Now it’s common to have Sunday evening buses full of students headed back to SCSU.”

Commissioner Lenzmeier went on to say that the majority of riders use Link services more than one day a week, which he believes is helping to manage congestion on highways 10 and 94.

There is one weekday bus trip that isn’t tied to the train schedule.  Northstar Link makes it possible to work a half day or make a short, leisurely trip on Fridays.  The Fabulous Friday midday bus service starts in St. Cloud at 10:15 a.m. and ends in Minneapolis at 12:45 p.m., with stops in between at Becker and all Northstar train stations, except Fridley.  The bus leaves downtown Minneapolis and heads north at 1 p.m. with stops at all Northstar stations, except Fridley.

ST. CLOUD — Northstar Link route 887T and Northstar Commuter Rail 888 will provide service to the 12:05 pm September 28 game vs the Indians. This game was originally scheduled for 3:10 pm .

Watch the time in later innings. Trains must leave at the posted times even if the game is delayed or goes into extra innings. 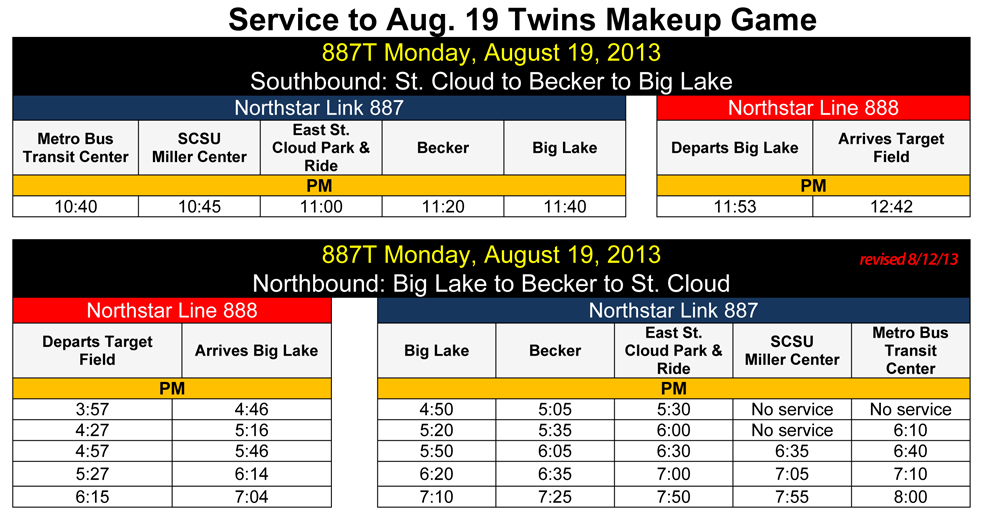 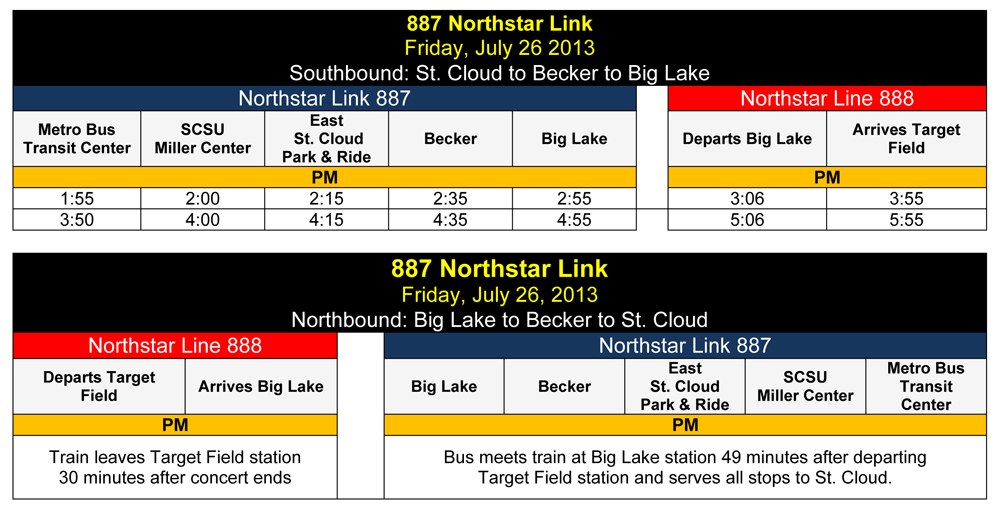 ST. CLOUD — Northstar Link 887 will not operate on the July 4 holiday and will offer reduced service on Friday, July 5, to follow Metro Transit’s schedule for Northstar commuter rail route 888.

Northstar Link schedules for July 4 and 5:

887: No service on Thursday, July 4. To operate reduced service on Friday, July 5. Weekend fares to apply. See schedule below.

887T: In service as scheduled for the July 4 1:10 pm Twins game. Regular 887T fares to apply. Schedule posted on catchthelink.com. 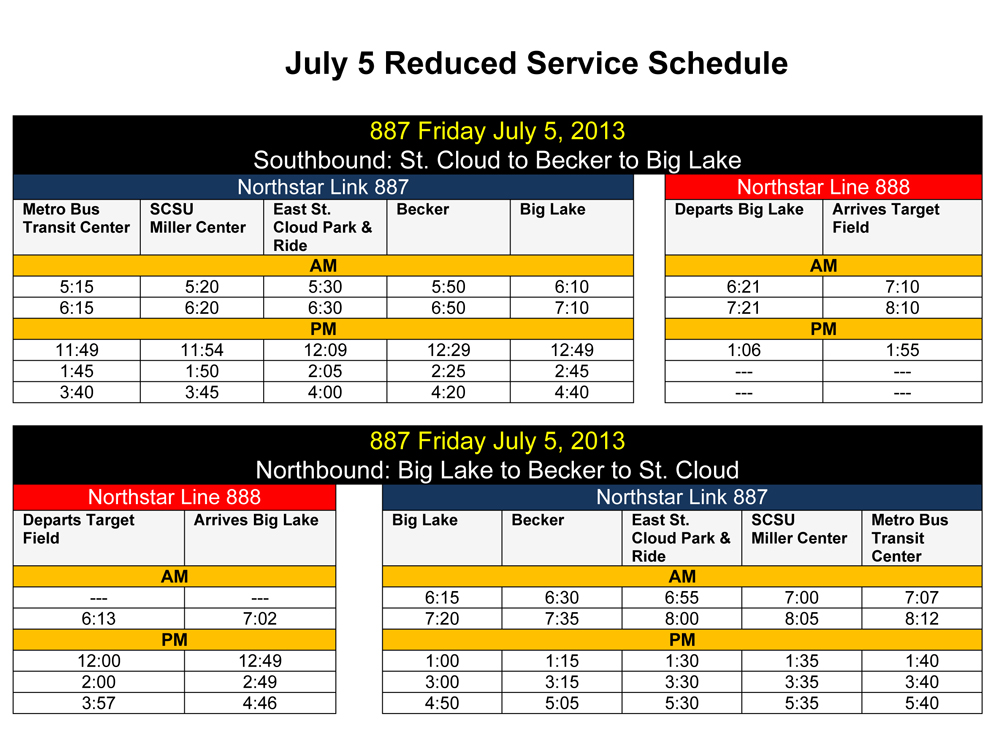 Complete schedule details are available at www.CatchTheLink.com for the bus and www.metrotransit.org/northstar for the train.

ST. CLOUD — Let Northstar Link and Northstar Commuter Rail take you out to the ball game.

Every Twins home game this season will have bus and rail service. Baseball fans will be able to take the Northstar Link bus from St. Cloud or Becker to Big Lake to connect with the Northstar train, which takes them directly to Target Field in Minneapolis. At the scheduled departure time, or 30 minutes after the last out for specially scheduled trains, fans will be able to board the train to Big Lake and easily transfer to the Northstar Link bus to finish the trip back to Becker or St. Cloud.

Separate tickets are needed to ride the Link and the train. Link rides cost $1.75 or less each way. Train fares vary by station. Before games, round-trip train tickets and Northstar Roundtrip Family Passes can be purchased online at www.metrotransit.org/Northstar. Just print your ticket and keep it with you.

“Taking the Link and train are part of the fun of going to a baseball game,” said Stearns County Commissioner Leigh Lenzmeier, chair of the Northstar Corridor Development Authority. “Online train tickets make it even easier to enjoy the stress-free ride.”

The Minnesota Twins Northstar Link service is called route 887T. The 887T schedule is available on Link buses and Northstar trains, online at www.CatchTheLink.com, or by calling 877.LINK.010.  For information on train schedules and fare options, go to www.metrotransit.org/twins.