ST. CLOUD (9/30/14) – Changes in the Northstar commuter rail schedule prompted adjustments in the 887 and 887F Northstar Link commuter bus northbound schedules. These time changes are effective October 6, 2014 and should have minimal impact on riders.

The change impacts select northbound runs that meet the Northstar commuter train. The bus departure time is delayed to accommodate the later arrival of the train.

Stearns County Commissioner Leigh Lenzmeier, chair of the Northstar Corridor Development Authority, which sponsors the Link, says 2014 has been a good year so far for the bus service.

“Link ridership for 2014 through August is up 10.4 percent over last year,” Commissioner Lenzmeier said. “People, and commuters and students in particular, have really embraced the transit connection to the Northstar train.”

ST. CLOUD (8/19/14) – The Minnesota State Fair opens this week and Northstar can help you get there.

More information about the Family Pass may be found at: http://www.metrotransit.org/buy-a-northstar-roundtrip-family-pass-and-save-big

It is important to note that there is no extra Northstar service planned for the State Fair. Northstar Link meets every train on weekdays and has limited service on weekends. Customers are encouraged to plan ahead and allow extra time for traveling between the State Fair and Fridley station. Plan to leave the fair at least one hour to 90 minutes before you expect to catch the train at Fridley Station.

Northstar does not operate on Labor Day.

To get to the game:

– Catch the Northstar Link Bus from St. Cloud or Becker to the Northstar train in Big Lake.
– Ride the train until the end of the line at Target Field Station, where you can make an easy – and FREE – transfer to a METRO Green Line train for service to TCF Bank Stadium.
– Travel time from St. Cloud to TCF Bank Stadium is just over two hours. This includes time for fare purchase and transfers. Using public transportation will get you to the game in time for some pre-game activities.

For the return trip:

Northstar Link bus service from St. Cloud or Becker is timed to connect with Northstar trains at Big Lake Station. Northstar train will depart Target Field station 30 minutes after the end of the concert. Customers will be able to board the train to Big Lake and easily transfer to the connecting Northstar Link bus to complete the return trip to Becker or St. Cloud. Bus rides cost $2 one way and are paid for separately from the train ride.

Northstar Link bus service from St. Cloud or Becker is timed to connect with Northstar trains at Big Lake Station. After the game, at either 30 or 90 minutes after the end of the event (depending on the day), fans will be able to board the train to Big Lake and easily transfer to the connecting Northstar Link bus to complete the return trip to Becker or St. Cloud.  Bus rides cost $2 one way and are paid for separately from the train ride. 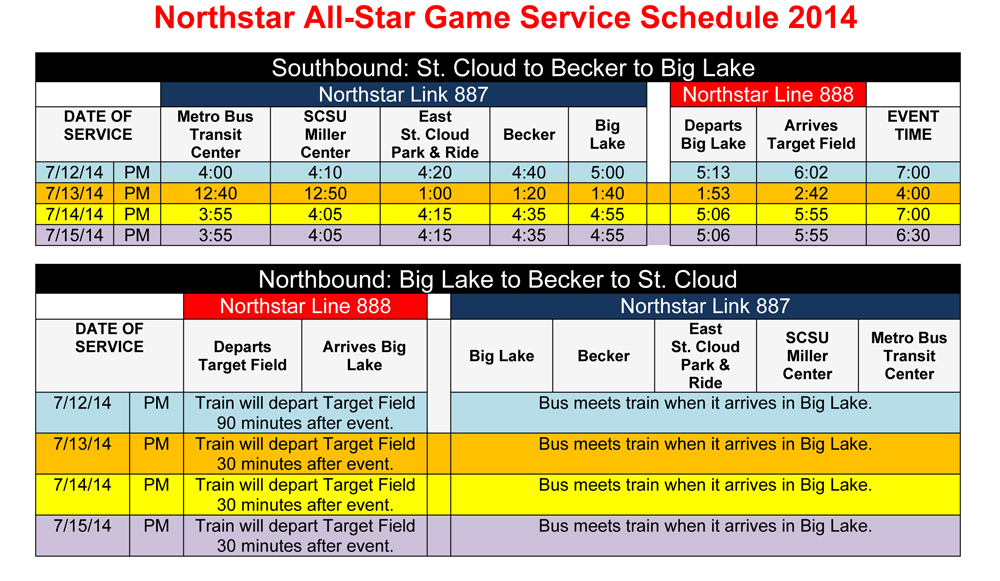 With the opening of the Green Line LRT, people can make connections from Target Field to the University of Minnesota, the State Capitol and downtown St. Paul.

There will be nearly 500 trains each day at Target Field Station, with Green, Blue and Northstar lines combined, plus almost 2,000 bus connections nearby.

“It’s getting easier to use transit, which, for a commuter, means less stress and more money in your pocket,” Commissioner Lenzmeier said.

In addition to Northstar Link’s regular weekend schedule June 14, an extra southbound trip will operate from St. Cloud to meet the extra Northstar train in Big Lake for the METRO Green Line opening ceremonies. An extra northbound bus is scheduled for the return trip.

Ribbon-cutting ceremonies are planned Saturday at the Union Depot and Target Field stations, with community celebrations at seven Green Line stations throughout the day.

The Green Line will not be operational prior to the Union Depot ribbon cutting at 10 a.m. Details of activities at Target Field Station and the rest of the Green Line are available at metrotransit.org/GreenLine. 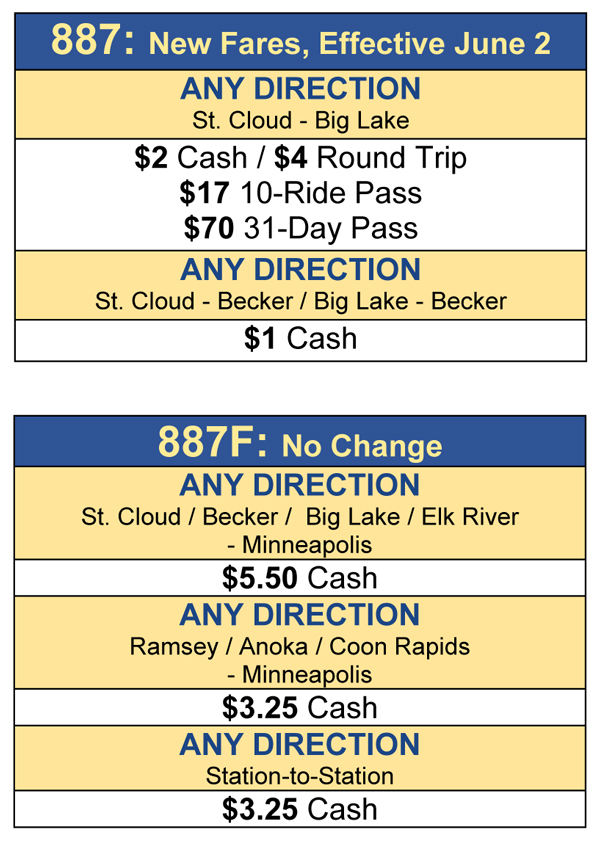 The changes were approved by the Northstar Corridor Development Authority in order to enhance service, according to Stearns County Commissioner Leigh Lenzmeier, chair of the NCDA.

“Every year since we opened in November 2009, we’ve seen tremendous ridership growth on the Link, and St. Cloud State has been one of the main ride generators,” Commissioner Lenzmeier said. “Adding two additional trips to Big Lake, with more frequent stops on the campus and downtown, will make it even easier to use transit.”

The new schedule will include meeting the earliest southbound train that arrives in downtown Minneapolis at 5:50 a.m.

A simplified fare structure for Northstar Link routes 887, 887T, 887V and special events also takes effect June 2. The new fare is $2 for travel between St. Cloud and Big Lake and $1 for travel between Becker and St. Cloud or Big Lake. A new $17 10-Ride pass and $70 31-Day pass is available.

ST. CLOUD – Northstar Link, a commuter bus service operated by Metro Bus on behalf of the Northstar Corridor Development Authority, is seeking public input on a proposed rate adjustment for the service.

“We are proposing to simplify fares by keeping them the same regardless of the time of day or direction of travel,” said Tom Cruikshank, Metro Bus Director of Planning and Marketing. “This would result in a fare equalization — reducing fares for some riders and slightly increasing for others.”

The proposed changes would affect fares for Northstar Link routes 887, 887T, 887V and any special event service. Route 887F, which provides Friday mid-day service between St. Cloud, Becker and Northstar Stations between Big Lake and Minneapolis, is unaffected by the proposed changes. Travel on 887F would remain $5.50 for full cash fare or $3.25 for station-to-station travel. 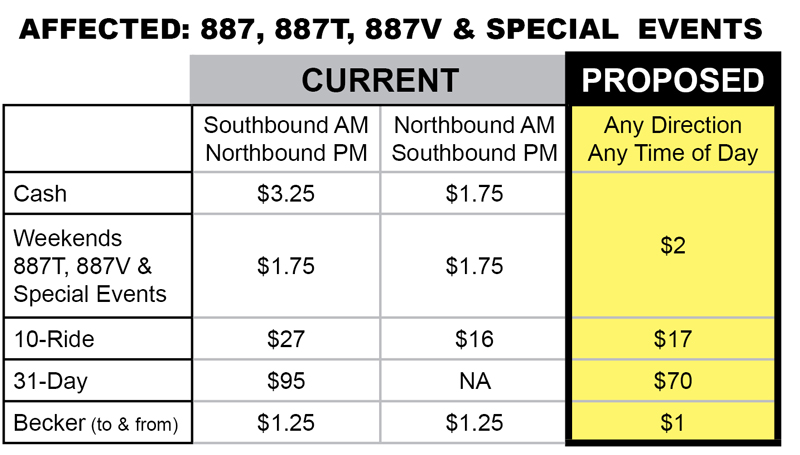 Starting with the Home Opener April 7

Northstar Link bus service from St. Cloud or Becker is timed to connect with Northstar trains at Big Lake Station. After the game, at either the scheduled departure times, or thirty minutes after the end of the game, fans will be able to board the train to Big Lake and easily transfer to the connecting Northstar Link bus to complete the return trip to Becker or St. Cloud.

Bus rides cost between $1.25 and $1.75 one way and are paid for separately from the train ride.

Game schedules and train fare information are available at metrotransit.org/Twins. The MN Twins Northstar Link service is called route 887T. The 887T schedule is online at CatchTheLink.com and is available on Link buses and Northstar trains.

ST. CLOUD — For the fourth consecutive year, people hopped on board the Northstar Link Commuter Bus in record numbers to travel the Highway 10 corridor between St. Cloud and Minneapolis. Link ridership grew 9.4 percent in 2013, with a total ridership of 55,213.

Northstar trains also serve some special events and all home Twins and Vikings games. Again in 2014, all Twins home games will have Northstar Link and train service.

The number of Northstar train commuters also grew in 2013. Ridership reached 787,239 in 2013, a 12 percent increase. Last year’s ridership was the highest in the line’s four-year history.

The top reasons people use Northstar Link are cost savings, stress-free travel and convenience, according to Stearns County Commissioner Leigh Lenzmeier, chair of the Northstar Corridor Development Authority. The authority is the group that oversees the Link.

“A majority of customers ride more than one day a week, too, which is helping slow the growth of congestion on highways 10 and 94,” Commissioner Lenzmeier said.

The Northstar Link is a multi-purpose mode of transportation, serving not just commuters but sports fans and students.

Northstar Link provides one trip each week that is not tied to the train schedule. Northstar Link makes it possible to work a half day or make a short, leisurely trip on Fridays. The Fabulous Friday midday bus service starts in St. Cloud at 10:15 a.m. and ends in Minneapolis at 12:45 p.m., with stops in between at

Becker and all Northstar train stations, except Fridley. The bus leaves downtown Minneapolis and heads north at 1 p.m., following the same route.